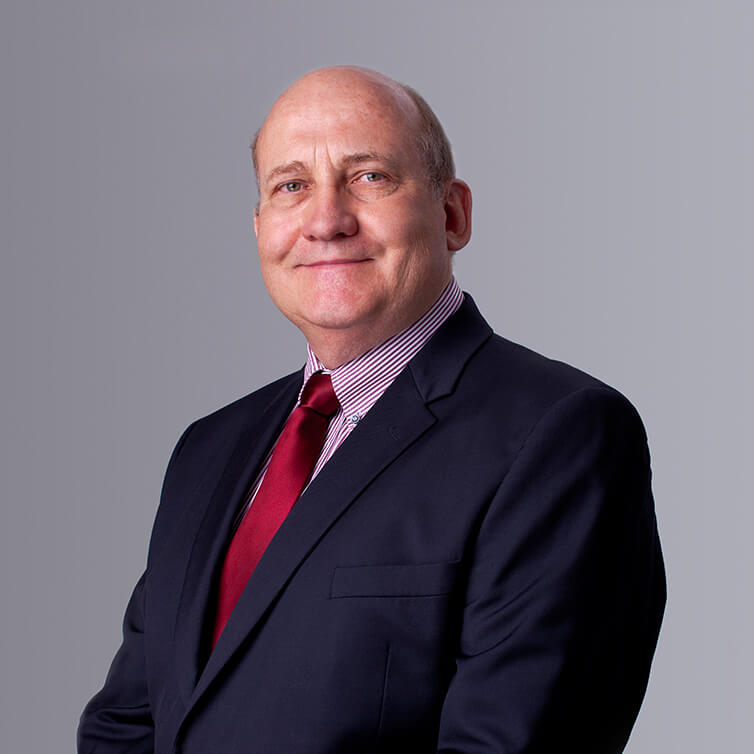 William Midgley is a director in our Corporate & Commercial practice. William has over 35 years of legal and corporate experience as a general commercial and commercial property lawyer.

William is the reference partner in the Corporate and Commercial practice for commercial and residential property acquisitions, developments and mergers including retail shopping centers, offices and industrial parks and residential schemes, commercial sectional title schemes and student accommodation and the establishment and/or transactions relating to commercial and residential property companies. This extends to negotiations, drafting and project management of various transactions, including sales of shares, sales of business, leases, partnership and joint ventures, co-ownerships, shareblocks and time share schemes, property asset and management agreements and memoranda of incorporation. He also supports the department's mining section, in addressing surface leases, servitudes and rights of use.

He is a reference partner in the firm for corporate real investment trusts ("REITS") and collective investment schemes in property ("CISIP's") (JSE listings, mergers and acquisitions, schemes of arrangement, rights issues and other corporate actions, including board and shareholder related issues) and private equity property funds, addressing structuring and tax issues, as well as the corporate legal issues relating to such entities.

William is also the Johannesburg reference partner for the firm's Hotel and Leisure practice group, for hotel and leisure resort mergers and acquisitions and development, lease, management and marketing agreements.

William joined Cliffe Dekker Hofmeyr in January 2011, after a period of approximately two years at Johannesburg BEE law firm, Mkhabela Huntley Attorneys. William was a Non-Executive Director of JSE Listed Hospitality Property Fund Ltd (appointed January 2007 and resigned in February 2013). During 2008, William ran his own consultancy firm, doing hotel acquisitions and developments, primarily for Hospitality, as well as attending to the legal aspects of setting up a property fund in Mauritius for the Mauritian Rogers Group in partnership with Grapnel Property Group. The fund was then listed on the Mauritian Stock Exchange. From 2006 to 2007, William was the executive director (legal and administration) of JSE listed Pangbourne Properties (which controlled three other JSE listed property funds and their subsidiaries). During this period, he supervised a fund listing, acquisition of a listed fund and various other acquisitions as well as a wide range of commercial property transactions.

William was a partner of Edward Nathan, in its various permutations, from 1991 to 2006. Prior to this he was the group legal adviser to a JSE listed property development company followed by a secondment to Westrust Liquidators (1989-1991). William's career started at Bowman Gilfillan (now Bowmans) in 1984 where he completed his articles (1984 - 1985). He worked in its commercial department as an associate until mid-1989.

The 2019 Chambers states that the team is known for being a "market-leading group with a deep bench of experienced practitioners regularly instructed to deal with sophisticated, high-value cases. Advises on the full spectrum of real estate matters including conveyancing, REITs and commercial property finance. Counts leading South African real estate groups and financial entities among its clientele. Increasingly active advising on mixed-use developments. The team earns praise for its ability to provide "quick response times, detailed responses and practical solutions for complex problems." Another client appreciated that "they create the atmosphere that they're always willing to help - and they do."

William's 2019 Chambers' citation states "William Midgley has a wealth of experience handling corporate transactions in connection with both residential and commercial properties, with significant expertise working on REITs. Interviewees report that he has "a very strong commercial understanding of this sector," as well as pointing to his "deep knowledge and significant experience."

William is also a member of CDH's Corporate and Commercial team which is again ranked in 2019 in Chambers Global as a Band 1 firm.